Once upon a time, I was the mother of four small-ish children–age 11, 8, 5, and newborn. This mother was tired. This mother was exhausted. This mother dreamed and dreamed and dreamed of rare moments when HER mother would take the kids for a few hours during the day…maybe even overnight. Especially overnight. During those brief hiatuses from Motherdom, she would sleep and shop and watch whatever-the-heck she wanted to watch on television–more than likely mindless junk like The Desperate Housewives of Beverly Hills or whatever those shows are called now. It was bliss. It was heaven. It rocked. Totally.

So it was with the same giddy anticipation that–when my mother said a few days ago, “I’ll keep the kids a couple nights this week,”–I approached my current time off. I’ve daydreamed about it. Analyzed it. Planned it. Charts and graphs might have been involved, but I’m admitting nothing. Anyway, to prepare myself, I bought paint. Rented movies. Finished all my laundry so that no folding of the underwear would be necessary during my forty-eight hours of aloneness. In my fantasy-land, this time off was gonna rock. Totally.

My kids have been gone for twenty-four hours, and the time by myself has sucked.

And I’m not sure what has happened. 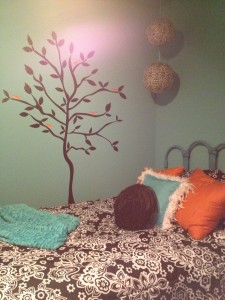 But I miss my kids.

I’m not sure if it’s because my once-small kids are now 17, 14, 11, and 6…or that I’m only one year away from my oldest graduating high school and heading off to college…or that maybe nostalgia is getting to me, combined with the reality that they’re all growing up fast and my time with them is short. But I miss my kids.

I’ve become one of those silly mothers that I’ve always made fun of who say things like “I miss my kids so much!” when they’re hitting the sales in New York City. Okay, maybe not that bad, because the next time I go to New York, I am totally not taking my kids and I won’t feel bad about it, but still.

I sorta miss my kids. It’s kinda sad. I have no idea what to do with myself with them out of the house.

I think I’ll start a Vampire Diaries marathon…maybe even stay up all night and watch.