My friend Amanda has a new book out. Today I’m interviewing her book character, Marcus.  I’ve never done a character interview before, but I thought it might be a fun way to switch things up a bit. Here’s the interview!

Hi, Marcus, I’m Amy. Glad you could meet up here for a chat!

Well, the author didn’t give me a choice.

Um … I guess it depends on your questions.

They’re all fantastic ones, but let’s start with biographical details.

You know my name’s Marcus. Marcus Brenner. I’m thirty-two. What else do you want?

A brownie fudge sundae. But first, could you describe yourself for the readers?

Doesn’t the book do that? Okay. Brown hair, brown eyes, five-foot-eleven. Um, and I’ve got broad shoulders. Suit coats are hard to buy because my shoulders don’t fit. Not that I need a suit coat for anything.

I hate to dress up too. What are your strengths and weaknesses?

I figured you’d ask something like this. The author asked me not to leave things out unless they count as spoilers, so … I guess I’m like most people—my strengths and weaknesses are two extremes of the same thing. I don’t do things halfway, and I don’t give up. The weak side of that is, I can’t quit things even when I should. Probably how I ended up an alcoholic. Recovered now, but it took me too long to quit. Another weakness—you can probably tell I’m not good with words. Explaining my thoughts is hard enough; feelings are even harder. I don’t know what the strength would be in that. I guess it’s that instead of talking, I take action. I protect and fix and do what needs doing.

Like me. When things need fixing, I’m totally great with a saw. Anyway, what are you most afraid of?

Failing to protect my family—my Christian family. We’re in danger all the time. It’s part of the world we live in. Anybody in my family could be arrested any day, and I’d never see them again. I can’t let that happen. Also … I don’t talk about this to anybody, but … I know someday I’ll be arrested, too. Locked up. For the rest of my life. It’s that or deny my faith, and I won’t do that. But yeah, it scares me, picturing the jail cell, knowing I’ll die there.

Death is depressing. Let’s talk books, movies, and music instead. Which do you prefer and what are a few favorites?

This is a better question. Thanks. I don’t read, except the Bible. The real Bible, not the one retranslated by the government. The author told me I can talk about anything here—that you’re safe. So … yeah, I have a Bible. I don’t really get music or have any favorites. When I’m driving in my truck, I roll down the windows and listen to the wind. That’s my music. I do like good movies. Any kind, if it’s got a good story. My favorite is Jaws.

It took me ten years to get in the water after I saw that movie. So how do you get along with your parents today, and did you when you were younger?

I don’t know anything about my dad. He left when I was little. I got along with my mom fine. She died twelve years ago. Now ask me the next question.

Okay, okay. Say you’re at a store. Name five items likely to be in your shopping cart.

Doesn’t that depend on what kind of store I’m at?

Okay, sure … What kind of store are you likely to be at?

Probably home improvement. I’m a contractor. If I’ve got a woodworking job, then I’m stocking up on lumber, stain, sandpaper, maybe paint … Otherwise, it could be anything. I’m kind of a handyman, too.

Again, me too. Except I’m a woman. How do you unwind after a long day at work? I unwind with chocolate and five episodes of American Dad. Or The Office, depending on my mood.

I like my job, especially the woodworking. Staining a piece of furniture is a great way to unwind. It’s good to see something raw turn into something finished. If I’m stressed out, I might go for a run at the park or go for a drive in the country.

I try never to run. What’s the most important turning point in your life so far?

Becoming a Christian. That was three years ago. It changed me in all kinds of ways. I don’t even know how to explain how differently I see things now, how differently I live. Knowing I can honor God in the things I do, the things I think, after everything He’s done for me. He gives me mercy every day. And someday I’ll be home with Him, with all the Christians who ever lived. It’s the biggest family ever. And I belong to it.

If you want a second turning point, it would be when I finally stopped drinking. Or when I met Lee.

What can you tell us about Lee?

She’s a nurse. She’s a great cook. She likes Klondike bars for some reason. She’s good with words. And … Lee’s seen the worst parts of me, and she’s stayed anyway. She sees me. That’s what you need to know about Lee—she sees and she stays.

Ah, a good woman. Marcus, I know being interviewed isn’t your favorite thing to do. Thanks for being here.

Sure. Thanks for letting people know about my book.

And there you go! Go grab yourself a copy of Seek and Hide on Amazon–it’s great and you won’t regret it! Thanks, Amanda! 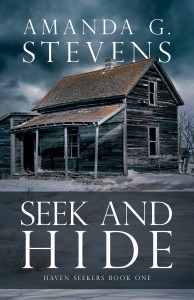 Six years ago, the government took control of the church. Only re-translated Bibles are legal, and a specialized agency called the Constabulary enforces this and other regulations. Marcus Brenner, a new Christian, will do anything to protect his church family from imprisonment–including risk his own freedom to gain the trust of a government agent. Aubrey Weston recanted her faith when the Constabulary threatened her baby. Now released, she just wants to provide for her son and avoid government notice. But she’s targeted again, and this time, her baby is taken into custody. If only she’d never denied Him, maybe God would hear her pleas for help. When Aubrey and Marcus’s lives collide, they are forced to confront the lies they believe about themselves. And God is about to grab hold of Marcus’s life in a way he’d never expect, turning a loner into a leader. 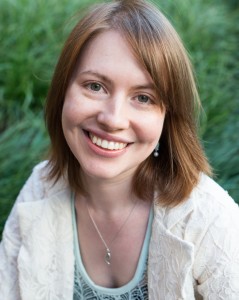 As a child, Amanda G. Stevens disparaged Mary Poppins and Stuart Little because they could never happen. Now, she writes speculative fiction. Holding a Bachelor of Science degree in English, she has taught literature and composition to home-school students. She lives in Michigan and loves books, film, music, and white cheddar popcorn.

Amanda is giving away a copy of Seek and Hide to one lucky reader! Just comment below to enter!

Confession is Good for the Soul

What Are We Becoming?