My youngest daughter came to me earlier this week and asked this question: “Can I get purple streaks in my hair for back-to-school?”

It took me less than a second to say no.

And then the following conversation ensued:

Me: “Because you have beautiful hair already.”

“You don’t think it will be beautiful with purple in it too?”

“Well of course it will be, because it’s you. But…no.”

“But (insert whatever Disney character’s name she was talking about here because heck if I remember) has purple hair and you said you loved it.”

“But purple’s my favorite color.”

“Because I said so.”

“But I love purple.”

Me: (sighing loudly): “Because you’re nine.”

And this is where her face falls, her shoulders slump, she looks on the verge of tears, and she walks out.

And this is where I begin to feel like crap. Again. Because it’s Wednesday morning and I haven’t yet had the opportunity to feel like crap yet and I’ve already made it to eleven o’clock and yay me for managing that feat so close to lunch.

That last one’s holding, I don’t care how much they try to wear me down.

But can I tell you a secret? Almost every time I’ve used that excuse, it’s had very little to do with the age of my children. Honestly, it’s had nearly everything to do with me.

The television show I’m thinking of? There wasn’t anything wrong with it, it was just on when they were supposed to be in bed and I really wanted them to be in bed!

The sleepover? It was the first one with a friend and there’s no way I would be able to sleep through all the worry if I let them go!

The shirt I’m thinking of? It had a picture of a music group on it that I really didn’t want anyone to know I let my son listen to.

Playing basketball? She was already in guitar lessons and gymnastics and I really didn’t think I could handle yet another activity.

The tattoo? Like I said, not happening on my watch.

But when my daughter asked about the hair color, I didn’t really have a good reason. Most of those other things happened when my older kids were younger and I spent a whole lot of wasted time worrying about what other people (namely, other parents) would think of my parenting skills. Nowadays I don’t care much about what other people think of those skills; I’ve managed to (mostly) raise three other healthy, happy, kind, respectful, and polite children so I must be doing something halfway okay.

And honestly, that was my main reason. She’s nine. And in the span of more than twenty years of parenting, that has become my standard, knee-jerk response to get me out of doing almost anything. 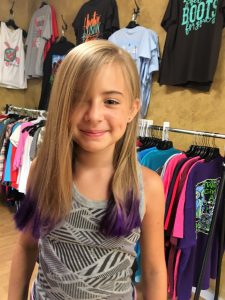 In the end, I came up with this. Two inches of hair, all the way around the head. If her hair is damaged later, we’ll cut it. If people think it looks crazy, oh well. She loves it. She thinks the purple looks like feathers flapping at the end of her hair. She’s brushed it a thousand times. She’s braided it even more. She’s twirled around the house non-stop for twenty-four hours now. Telling me to watch…asking me to touch it…feeling like a Disney princess…smiling when I tell her she’s beautiful.

That’s exactly what she should be doing.

P.S. I saw the movie Bad Moms yesterday. I don’t say that as an endorsement (though the main character’s name was Amy and the movie was hilarious). I say it because I related to almost everything those women did. So maybe I’m a bad mom. Maybe that’s the bottom line. Maybe only bad moms let their little girls dye their hair purple.

Funny enough, now that I’m older…I’m okay with it.

Ann Lee Miller + The Art Of My Life + Giveaway

Tell Me What You Think