So my book has been out for nearly three months now, which is hard to believe. It’s been a fun three months…a stressful three months…but it’s going well. That makes me happy. But what makes me even happier is to receive reader feedback in the form of Facebook messages, reviews, and personal emails. I’ve gotten several, and I’ve noticed one common theme in every single message, one I feel needs to be addressed here and now, before rumors and innuendo and hurtful gossip continue to spread like wildfire through my neighborhood, town, and pretty much all of Middle America. So here we go. Here’s the assumption. Here’s what people say, hands-down, more than anything else.

“You must be a big Bachelor fan!”

And here’s the answer to that statement:

I mean, I watched an entire season of The Bachelorette once, and it just so happened to be the season where Trista met Ryan, they got married, and they’ve lived happily ever after with two kids and a dog since then (thanks in part, I guarantee 88%–to me and my faithful viewership).

But that’s it. Other than that single season, I’ve only watched a handful of shows. I’ve seen enough to know who Emily and Jef (also Bachelorette) are and that they didn’t make it much past the finale (shocker) before calling it quits. I know that Sean Lowe was referred to as the first virgin Bachelor even though he technically wasn’t/isn’t one. He’s getting married soon to the gal he picked, and on television. Hopefully he’s gotten advice from Trista the Bachelorette and not Kim Kardashian. It’d be nice if his reality-show marriage lasted longer than six weeks. I know that Juan the current Bachelor isn’t from this country, although I can’t remember where exactly. I also know that when people tweet about him, they use stupid hashtags like #Juanuary and #Juanderful (Just like I plan to do when I tweet this post in a few minutes. Hey, I think it’s ridiculous, but I’m not too proud to do it).

But that’s it. I’m not a big Bachelor fan. I might be if more of them actually lasted longer than the time they spend on-air. And as far as The Wedding Game goes, it was just an idea I pulled out of thin air. That and from the aforementioned Ms. Kardashian’s ten-minute marriage to Kris Humphreys. So see? Something good came out of that brief union, at least as far as I’m concerned.

But hey—if Bachelor’s your thing, watch it. It’s my daughter’s thing, so I’m sure I’ll see at least part of it next Monday night. Who knows, maybe I’ll learn to like the show as much as she does. After all, there’s a lot of flirting, a lot of kissing, and I’m a romance writer.

That is totally my thing. 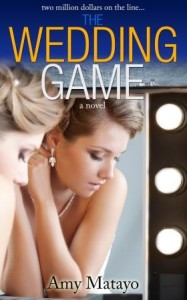