Welcome to my new website! It’s so much better than my old one, in that it:

2.  Has pages that are actually filled in

3.  Has pictures of me opening a door and sitting on bench instead of railroad tracks, which means that I:

a.  Will no longer be in danger of getting killed

b.  Will no longer have to deal with that obnoxious railroad tie jabbing me in the thigh

c.  Will no longer have to listen to people yelling “idiot!” while I sit there and smile

4. Has a cute, little AM design at the very top that I think is just so cool. Kudos to my designer, the fabulous Todd Basham. Here he is hard at work… 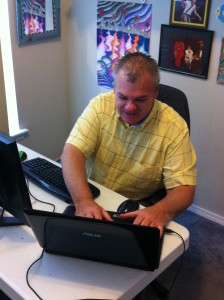 Or maybe he’s playing Solitaire. Hard to tell from this angle.

Anyway, it’s a new day for me in writer-land, so I’m glad you’re here with me.

It’s been an interesting couple of weeks, to put it mildly. For my writer friends, you know what I’m talking about. For my non-writer friends—let’s just say that my publishing house went through a major shake-up with its entire fiction line, and while my first book is safely on its way to publication in February, my other two books haven’t fared quite as well. A lot of my author friends have mourned the loss of whole contracts, a few friends have lost jobs, and everyone has gone through a little shock and disappointment and sadness, but…

God is still God. God has a bigger plan than I do. God sees the future and the future is good. And since heaven knows I can barely manage to deal with today’s disasters, I’m glad.
So for now, we’re back to shopping the second and third book (one of which hasn’t yet been written). I’ll let you know when I hear some news on those. But as for my first book—I have a cover. A cover that I L.O.V.E. I’ll show it to you soon. Woo.

WHAT is going on with Carnival Cruise Line? First it’s the stranded ships. Then it’s the overflowing toilets. Then it’s the lack of food. And now passengers are falling overboard?? Now—as someone who has been on a couple of cruises in her life—I don’t really see how someone could just accidentally fall because the railings are just too high to trip and splash-land fifty feet below, but still. Carnival needs to get its act together, fast. I want to take my kids on a Spring Break cruise next year, but if I don’t see proof of a turnaround, we’ll do something safer. Like skydiving.
I saw The Great Gatsby this weekend. This was the best part: 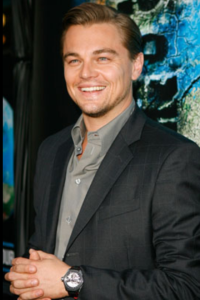 Sadly, there were no other best parts, unless you enjoy seeing two-and-a-half hours of nothing but one Roaring 20’s party after another. Otherwise, there’s just not much there. Plus, Jay-Z was in charge of the music, and—call me crazy—I thought rap/hip-hop made its debut sometime in the eighties and NOT almost a hundred years ago. Apparently I was wrong. This combination of awkwardness plus a few more things made the whole experience such a tragic disappointment for this novel-to-movie-loving girl.

Chris Brown is weird. Why is he spraying demon graffiti all over the streets in his neighborhood—graffiti that is scaring all the small children who make a daily pass by his house? Amanda Bynes is also weird. Why are her cheeks pierced? And why is she posting nude pics of herself on Twitter? Twitter is public, not private. Anyone into the whole nude-pics-posting thing knows this. Which is totally not me. I’ve just heard… Anyway, someone give these two an intervention now, please. Or if the Someone’s-In-Charge need some help or just don’t have the intervening time, give me their phone numbers. I’ll do it.

Well, I should get back to work. I’ve got so much to do—like laundry and errands and rearranging my sock drawer into piles of blacks, whites, and argyles. Plus, I think I might work on creating a few more outlines. That one at the top of the page was kinda fun. Who knew all those years of school would pay off one day?

Thanks for visiting my site!