I wrote a little poem to reflect my pure joy over beginning yet another week. I’ll share it with you now:

Oh, weekend, why do you do this?
Come to an end the way you do
Just when we’re good and happy
You dump me like a stinky shoe

All I want is to sit here
On my couch with a bag of M & M’s
But instead your time runs out
And I have to get up again.

But good news! I just discovered
There’s only 552 more hours
Until summertime sings its pretty tune
And I can skip my showers

(Feel free to clap now. Or shine your lighters. Or raise your lattes like they do in badly-lit coffeehouses on questionable poetry night.)

Sigh. So I had a lovely weekend filled with soccer games and dances and birthday parties and other parties (There was cake, so of course I made the rounds. Not sure I was even invited to a couple. Whatever.) and mucho sitting and some sleeping. But now that’s over and it’s time for a new week. Yay. Woo. Awesome. *insert sarcasm here*

But this week isn’t all bad news. Because after the work and the guitar practices and the soccer practices and the volleyball lessons (my children’s activities, not mine. Though I would like to take up tennis, because they wear cute outfits and stuff. Not to actually play. Or exercise. I’m so sure.) and the grocery shopping and the laundry-doing…I HAVE BOOK CLUB!

Now, I was invited to become a part of this particular group a few months ago. Completely random. Totally out of the blue. Had absolutely nothing to do with the whining and the begging and the brownie-bribing and the threats, um…I mean, suggestions…that I made to be included over the course of this year. And so what if this group is made up of a bunch of super-intelligent teachers from two towns over…and me? Who cares? I was invited, and I’m going Thursday night. So there.

And y’all, this book club rocks. Not exactly sure who is doing the book-picking, but this person needs to keep it up.

First, we read this one: 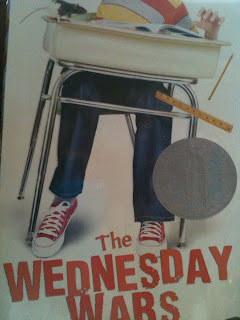 Which is basically the tale of seventh-grade boy stuck in after-school classes by himself every Wednesday with a teacher who (he thinks) hates him. The story takes place in the sixties during the Vietnam War. And I know I’ve sung the praises of this particular novel before, but you guys have GOT to read this. On my list of favorite books (which I think I might blog about at a later date for anyone who cares. All three of you.) it would probably come in around number five. Maybe four. This book has so much heart and is written so well that I just may read it once a year forever and ever, just to remember how well the author can write. In fact, I think I might order every book ever written by Gary D. Schmidt. The guy is that good.

Then, we read this one (okay, so I still have ten chapters left. Gotta read fast): 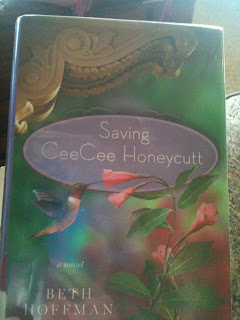 For anyone who liked The Help—is there anyone who didn’t?—you’ll like this one, too. It tells the story of CeeCee Honeycutt (go figure), a 12-year-old girl with the world’s worst family life and no one who really cares about her. Until her aunt shows up and whisks her away to another world. And pretty much changes everything for this girl. It takes place during the same time-period as The Help, and it’s also set in the South. Much like the other book, women dominate this story (as they totally should. Kidding. Sorta) but it’s definitely unique. A great book in its own right.

So that’s it. Two so far. But hey—I remember reading a few Oprah’s Book Club books that weren’t nearly as good as these two. So I think our track record is pretty impressive so far. Then again, I have no idea what the women read before I showed up. Maybe the books were terrible. Maybe they stunk. Maybe my arrival turned this whole club around.

Clearly I should have thrown a kicking, screaming fit been invited sooner. Because I totally make things fun. So incredibly enjoyable. The most awesome they’ve ever, ever been.

Except I can’t help Monday’s. There’s no hope for those.

(who, I dunno, might need to work on her humbleness)

And We Have Winners!