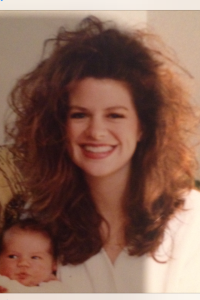 Take this, for instance. Here’s a painful look back for you. Painful for me, at least. Painful for my firstborn son every time he tried to take a nap on my shoulder, for sure. And if all goes as planned this hideous piece of my personal regret-filled history will self-combust in ten…nine…eight…seven…six…

Why isn’t it disappearing?

I guess this picture will be forever etched into the deep, dark confines of this blog, left here to taunt me and jab me and remind me that using half a bottle of Final Net in the 90’s was a really really really bad idea. Merely one of many I had back then. But now isn’t the time to talk about mismatched socks and Twisty beads.

So remember last week when I raised my right hand and took a solemn vow not to make my next post about books? Well, see…umm…here’s the thing: I might have lied a little. BUT I HAVE A GOOD REASON I SWEAR I DO! And I’ll tell you my reason. But first, a little history to go with my super-valid excuse for sinning.

So a few months back, a friend of my son’s (who has since become a friend of mine and our whole family) moved into our house. Long story, but he needed a place to stay and we just so happened to have four walls and a roof. Coincidence? I think not. Anyway, he moved in and life moved on.

Cut to a couple weeks later. I was on a particularly long call with my agent (important note: a short call with my agent lasts approximately an hour and a half because I like to gossip she talks incessantly). So this call was longer than that. And so I hung up the phone only to hear him say, “Who the heck were you talking to for three hours?”

And I said, “I write books. She’s the one who sells them.”

And I—who already knew he played a really good piano and could handle the guitar way better than I could even after two years of lessons and happens to have a great singing voice—said, “Oh really. What do you write?”

And he said, “Lyrics and poems and a couple of screenplays. Want to hear one of my songs?”

Now at this point I was having flashbacks of the times I’d heard things like Want to hear my life story and then you can write a book about it and we’ll split the profits?

And then he said, “It’s actually a rap. You like rap music?”

And so he started.

And I smiled. A polite smile. A patient smile. An “Oh crap what am I gonna say to him if this totally sucks?” kind of smile. And I waited.

And he kept going.

And as I listened to him, I could feel the polite smile slowly slipping from my face. And then I felt my mouth fall a little. And then I got a little choked up but had to play it cool. And I was aware that the longer he performed the more I looked like a shocked and gaping fangirl but come on! At the time the guy was nineteen (he has since matured to the ripe old age of twenty thank God), and he had written a song better than most any other song I’d ever heard before with crazy rhymes in all the right places and descriptions I couldn’t imagine a man in his sixties thinking up and a bunch of other stuff I can’t really explain because I don’t know all that much about writing music. Like, zero. But whatever. Totally not the point.

And so when he was done (and remember, I’m still playing it cool here) I said, “So can I see a couple of your poems?”

And he handed them over. And I read them. And they were great. And I liked one particular poem so much that my mind started spinning and I asked if I could write a book around it, which just happens to be the novel I’m working on now. And then we had a conversation about publishing houses and agents. And then we talked about Amazon. And since that day, he wrote a whole book of poems. An entire book.

And today his book,  ARCHIVES,  released on Amazon. And I’m excited about it. And more than a little proud. 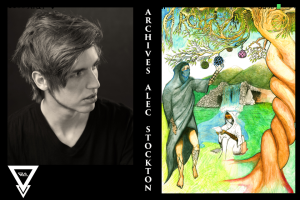 Because here’s the other thing. A few months ago at the request of my publishing house, I wrote a Dear Reader letter that was printed at the back of my first book, The Wedding Game. And at the end of it I asked my readers to discover their dreams and follow them. I suggested that maybe God’s up in heaven wondering when we’re all going to start pursuing what He put us here to pursue in the first place. And I asked those readers share their gifts with the world and to do it sooner rather than later, because time moves fast and there’s no sense wasting it on things you aren’t passionate about.

My friend Alec has a list of things he wants to achieve in life. Today, “publish a book” can be crossed off that list. And he’s twenty. And the fact that he’s actively chasing his dreams is something worth celebrating.

*Because I know some of you will wonder—no, this book isn’t necessarily a book filled with Christian material. Then again, it isn’t necessarily NOT a book filled Christian material. He wrote a book of poems. Poems about God, poems about politics, and poems about everything in between. And though you might not agree with everything he writes about, though I might not agree with everything he writes about, that hardly matters. After all, I’ve gotten my fair share of letters questioning why I would choose to write a “Christian” book and have my main characters be strangers who get married for money. One person called it demeaning to God’s sacred idea of marriage. To that, I just shrug. Because the whole reason a writer writes is to entertain people. Maybe even to make people think. We’ll never please everyone, but I’m convinced that if a reader gives something a chance, they will always find something to love inside the pages of a book. And in my opinion, that’s the point of opening one in the first place.

Random Thoughts (the only kind I have)