I woke up Saturday morning in the worst mood.

Nothing particularly bad had happened—had a good day Friday, went to bed Friday night feeling completely fine. But somewhere in those five hours between falling asleep and waking up (sleep and I are not on the best of terms right now—it doesn’t like me for some reason), everything had shifted. Maybe I dreamed I won the lottery and lost all the money. Or maybe I dreamed I did the laundry and turned all our clothes pink. Or maybe I dreamed that I met Adam Levine in person and he was short and ugly and talked with a nasally voice. No idea what went wrong between midnight and five a.m. All I knew was that everything did. 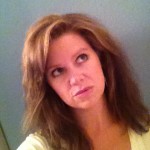 So I spent most of the morning rolling my eyes at my husband. Sighing at my kids. Glaring at the dog. Cursing inwardly at the ringing phone. Ripping dirty sheets off beds. Stuffing the stupid laundry in the washing machine. Shoving the even stupider clean clothes in dresser drawers. Slapping yet another meal on the stove. Slamming the cabinet doors that everyone kept leaving open.

And then the phone rang. It was my daughter telling me that she and my oldest son, plus my nephew, had just been in a car wreck. The best news? They were all okay. The worst news? The car was not. But the police officer was ultra-nice, so other than a stern lecture about not talking on your phone while driving, he got off with a warning and little else.

I was so thankful. And I cried tears of joy and praised God for keeping my kids safe and made a cake and shed my bad mood right then and there.

Instead, my bad mood escalated. Because now we had a stupid car to pay for. And we’re going on stupid vacation in five days. And my son knew better than to be talking on his phone while driving. And my husband wanted to go on a walk with me but it was so freaking hot and why couldn’t we wait until sundown or twenty-four hours from not at all? And the dog kept jumping on me. And the cat rubbed up against my black shorts and left white cat hair all over my leg. And I was mad at myself for being so mad at everyone else. And so on and so on and so on…

By dinnertime I was having a great big party—light on the cake and candles, heavy on the pity and longsuffering.

By now, you might be asking yourself—what exactly is the point of this story? Well, there isn’t much of one. Except to say that sometimes bad days happen to good people. Sometimes happy people get mad. Sometimes people just need to vent. Sometimes foul moods have a tendency to grow and grow until they’ve reached an almost irrational level. Sometimes an unexplained dark cloud hovers overhead.

But here’s the good news: Those clouds always…always…go away.

Now, life is back to normal. Sunday was a great day, and today is starting off to be even better.

Regret, Fear, and Other Unpleasant Things

The Time is Now

Frazzled (and trying to enjoy it)