So I had this really great blog post all typed up and ready to go. It was brilliant. The stuff Pulitzer’s are made of, I’m sure. And it was all about books, because that’s what I said we were gonna talk about this time. But then something happened. Something that made me shove that post aside like a table full of dirty dishes I didn’t feel like washing (Does anyone else do this? Instead of cleaning up the table, just swipe an arm across the table and toss everything into the trash…silverware, plates, and all? No one? No one? Weird). Anyway, as I was saying…something happened.

Oh, hang on a second. Let’s back up a little first to set the stage.

So earlier in the year I entered my latest book in a rather large writing contest. I can’t reveal the name of my book yet for judging purposes and because of keeping things fair and stuff, but that’ll come later. (And by the way, eventually I’ll fill out the whole Books section on the top of this blog. Also can’t yet, for judging purposes). Anyway, I entered my book in a writing contest. And sometime in late March, I got the news that it advanced to the semi-finals. Awesome. Woo. Excitement all around. But now it was time to wait until the end of May to find out if it would continue on to the final round.

So then on May 29—after waking up early because “Today is the Day!!”—I opened my email and read a message from the contest people saying the results wouldn’t be announced until later in the week. My hopes instantly deflated like a popped balloon. But I quickly got over it, because I had a birthday party to plan. And then later that day my dryer broke. And then early the next morning my computer got a virus and totally shut down. And then two days later the dryer man came and the computer man came and I had completely forgotten about the contest.

But then mid-way through all kinds of tools flying around my house while smart men fixed things, my phone rang. And like an idiot, I ignored it. But a little while later I listened to the message and got the news that my book had advanced to the finals. And I screamed at my voice mail because I was excited, and because making the finals is hard. Last year a book made it to the semi-finals, but that was all. Didn’t make it further. And I like this waaay better. So I flipped out. And I celebrated. And strange men looked at me like I was…strange. But whatever.

Now jump to four days later. To yesterday. (Is this story confusing anyone else, or just me?)

Anyway, yesterday. There I was, just laying out on my trampoline, trying to turn my pasty skin a little less pasty, when I reached for my cell phone to check my email. And then sat up so fast my vision went a little fuzzy. Because I saw these words in the subject line of one of the messages:

And my hand froze. And I made a weird little noise that I sure hoped my neighbors didn’t hear that sounded kinda like a cry and a squeal at the same time. And I opened the email.

And read the words I’ve been waiting nearly four years to read.

“Attached is your author contract….”

So now—after four years and four books and a whole lot of hours spent writing— I have an agent. Now I have someone in my corner who will help fight for my book. Now I’m not swimming in this big world called writing all by myself. Because now I have someone who believes in me enough to link my name to theirs. To put my face on their website. To say “Amy Matayo—client of the Blythe Daniel Agency.”

And here is my signature: 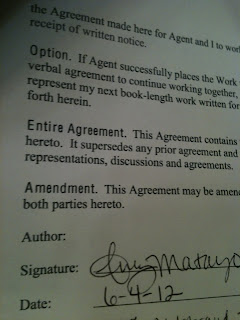 And while I know having an agent doesn’t guarantee publication, it does put me about a thousand steps closer. If all goes well, hopefully by the end of the year, my book will find a home at some as-yet-to-be-named publishing house.

And when that day comes, I guarantee my whole neighborhood will hear me scream.

P.S. Friday we’ll talk about books. Other people’s—not mine. And I fully expect those Pulitzer folks to start calling.