I’m so nervous about this book.

I really hope he read it enough.

Anyway, I’m getting off track. Why my neighbor? Because he’s Vance Wilson. Because he played professionally as a catcher with the New York Mets and the Detroit Tigers for a decade. Because he now manages with the Royals. Because when it comes to baseball (and probably most other things), he’s smarter than me. Because he’s more gifted than me. Because because because. And so he helped me with this book. In the same way a heart surgeon helps a patient to live. And I’ve never had a non-writer help me this much with a book. And my book releases on Tuesday. And I’ve been reflecting on the process. So I interviewed him and asked him a few questions about himself, about working with me, and about this project.

When did you start playing baseball?

I started when I was five. My mom signed me up because my dad didn’t think I would like it. My dad coached both my brother and I. Once he realized I actually liked to play, he coached me from age 6 to 16. I played in high school, then went to Junior College a red-shirted one year and played two years there.

When did you sign with the New York Mets?

I signed with them when I was twenty-one, played with the Mets for six years, then was traded to the Detroit Tigers and played with them for four years. I spent a total of eight years and twenty-eight days playing professional baseball.

What’s your favorite memory of the game?

My favorite memory was my Major League debut against the Cubs on July 4, 2001. The game was in New York so it was the Fox game of the week, nationally televised. I hit a double in my first at bat (which was my sixth at-bat in the big leagues), I had two hits in the game and we won. It was very emotional after everything I’d been though to get there. When you get your first hit and go on to win the game… (smiles) it was cool. (Side note: I put this memory in the book—it’s also Will’s favorite memory).

What brought you to retirement?

I was throwing to the bases during practice in Detroit in 2006 and my arm felt a little sore. I played through it all winter, but then made a throw during a spring training game. The next day I could barely bend my arm, but tried playing anyway. It turned out that I had torn both the ligament and the tendon. I went through rehab, then came back to practice and felt it pop—the tendon had torn completely away. That resulted in my first Tommy John surgery in July 2007, followed by another surgery in July of 2008. At that point, retirement was inevitable.

What is your job now?

My job now is completely different than being a player. When you’re a player, you’re both the labor and the product. As a coach (Vance is the manager of the Northwest Arkansas Naturals, the double-A affiliate of Royals baseball), you’re in charge of making sure to improve the product and instilling a work ethic in the labor (players). I’m in charge of whatever twenty-five guys are on the roster at the time—executing the development plan, overseeing the staff, and managing the baseball game. I’m in my office every day by 10:30 making plans for the day, then on the field every day from 3:00 to game time.

What did you think of the book writing process?

I have a huge respect for the process of things in life. As far as what I do, the process of developing a Major League player takes so much time. Not that I didn’t think the process of writing a book all the way through—from editors, publishers, agents, other author friends giving you advice, a baseball player giving you advice—wasn’t a time-consuming process. It was, and I have the utmost respect for the process of things. It was really neat to learn what goes into making a book. The most interesting thing was seeing that you had control of the work, but then when people wanted you to make changes you had to make the decision for what was right or wrong. And the success of the book ultimately hinges on those decisions. There’s a lot of pressure in that. I deal with that kind of pressure in baseball. Sometimes people see pressure as a negative thing, but it isn’t (he’s right—pressure gets things done). I enjoyed watching that process.

Was the book completely realistic?

(I may have embellished a little here. Whatever.)

Were the baseball details perfect in the first draft?

(Again, yes might be too strong a word. Leave me alone).

What are your off-season plans?

Well, one thing that I do that relates to what you do—you never really get away from the job. The players I work with on a daily basis never leave my mind. So I’m constantly thinking in my mind about how to make their deficiencies better. Plus there are a lot of new players coming onto the team next season, so I’m looking at them and getting ready for that. I also love working with young kids in the off-season, being part of the development of baseball. I’m planning to offer baseball classes this fall and winter—classes that will focus on learning the process and the mental fundamentals of the game rather than just the physical lessons. That should launch sometime in October or early November.

*listen up local parents of young players—you should do this. Details coming soon.

And so that was it. This is how I wrote The Thirteenth Chance. Absolutely not alone. But it was a fun process, one I’d do all over again. Because though this book was challenging, it was definitely fun. 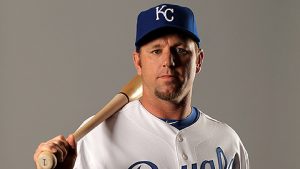 Vance Wilson is a former professional baseball player. He played all or part of eight seasons with the New York Mets and the Detroit Tigers, primarily as a catcher. He lives in Springdale, Arkansas with his wife Bridget and his daughter Peyton, where he manages the Northwest Arkansas Naturals—the Double-A affiliate of Royals baseball. He’s a super-cool guy (I added that last part myself).

Match Me If You Can

When I Grow Up…

Not So Social Anymore