Anyway, other than my sloth-like state, a lot has happened in the 3 weeks since we last talked on here. Thought I’d fill you in on a few of them now.

First, I am fully immersed in summer and enjoying every minute of it. I don’t think I’ve gone a day so far without eating ice cream, which makes my tongue really happy but my three-year old cutoff jean shorts a tiny bit sad. One day soon (as in the week before school starts) I’ll have to trade in the frozen stuff for raw spinach and wheat germ, but not now. Besides, healthy food isn’t allowed in the months of June and July—everyone knows this.

Speaking of July, we went to the beach over the fourth, the very first time—if not in all my life, at least all the years I can remember—that we’ve ever been to the beach over that particular holiday. It was fun. A lot of fun, actually. Except that by the time we located the exact right spot to view fireworks from the property we were staying on, the finale was in progress and the show lasted all of three minutes. Over. Done. A tiny bit anti-climactic. Especially since there wasn’t a firework stand anywhere close by, which made smuggling illegal sparklers and bottle rockets onto to the sand nothing but a longed-for pipe dream. Come on, what kind of state doesn’t allow the blowing up of explosives by children to occur next to such a large body of water anyway? Unless salt and seaweed and dead fish and bodily injury are an issue, I seriously don’t see the problem here.

Sigh. Despite the lack of explosions, we had fun.

Here’s a pic of my somewhat pasty left leg as I watch my daughter and niece play in the sand: 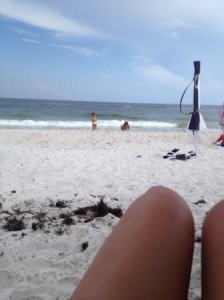 Second, I have taken a self-imposed hiatus from all things work for nearly a month now. A month of no writing. A month of no editing. A month of doing nothing but reading and sleeping and working on my tan. As a result, I’ve become entirely too good at all three. So good that I’m sort of afraid I’ve forgotten how to do anything productive. I guess only time will tell. And tell it will very soon, seeing that starting today I’m making myself re-enter the world of the marginally-useful. Edits are a-calling. Writing is gnawing at my conscience. Cooking is whispering my name, too, except it’s pretty easy to tell that particular one to shut up.

So say a prayer for me, because getting back to work is bound to hurt a little.

Third, I ran into John Mayer the other night. We had dinner together. He bought me flowers. And then he serenaded me. Except the first two never happened and there might have been a few thousand other people involved in the serenading, plus I’m not sure it actually qualified as a “run-in” when I paid money for a ticket at the arena where he was playing.

But still. I saw John Mayer. And that man knows how to put on a show. He is amazing on guitar. Incredible on harmonica. Had a cool Jimi-Hendrix-type bandana tied around his head. And his voice…his voice. I could have listened for hours. But about halfway through his concert, I realized something about myself, something I’m a little embarrassed to admit but will reluctantly admit anyway in front of all two of you reading this post. And here it is: While everyone else was dancing around and screaming and singing along to his lyrics, I was…

It hit me in the middle of Whiskey Whiskey Whiskey (one of my favorite JM songs) that I was analyzing his rhymes. Trying to come up with other words that also rhyme. Reflecting on a sentence he sang three stanzas back. Finding myself mesmerized by his use of “I” instead of “me.” It’s embarrassing, really, that I’ve fallen so far. That I’ve turned into someone who can’t even listen to a song or read trashy novel without scrutinizing it or trying to emulate it (as I was doing that night). Somewhere along this writing road, I’ve become a nerd.  A loser with a big fat “L” on my forehead. A disgrace to wanna-be cool people everywhere. The realization was enough to make me hang my head in shame. Which I did.

Until he looked toward my section of the crowd and smiled.

And then I forgot all about rhymes. Diagramming sentences became a lost art, replaced in an instant by a knowledge much more profound. Something that would remain with me for the rest of the evening as he played and played and played some more. Because from that point on, all I could think was…

Man, that guy is hot. 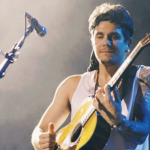