Why do so many actresses and actors, A.K.A. reality television stars, feel the need to announce they have a sex tape? It’s gross. It’s nasty. It’s icky.

And it reminds me that I have a very similar announcement of my own: I have Scotch tape. But not much, because it’s May and we have soooo many birthdays this month and I’ve wrapped and wrapped gifts and gifts and gifts, so I need to add Scotch tape to my grocery list.

So thank you, Courtney Stodden—latest in the line of People Completely Lacking Good Judgment—for the reminder.

What have y’all been up to this week? For me, besides playing around on Google, I’ve cleaned my house, worked a little, written a ton, and planted the puniest of gardens. See? 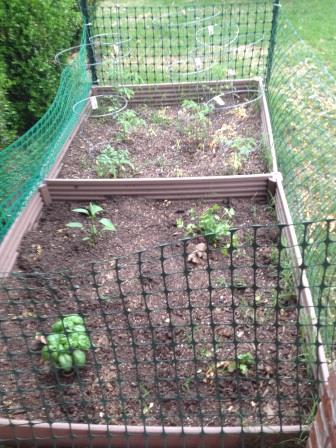 A pitiful nod to farming, but it’s mine, and tomatoes and basil and cilantro are my very favoriteist’s things, so I’m happy. As for the rest of our produce this summer, I’ll buy it at Walmart. I’m fine with that.

So after I finished the garden, I spent a grossly inappropriate amount of time changing my television channel from station to station to check for the latest news on local tornadoes. It’s bad, this tornado season. Awful.

As I type, Oklahoma is getting hit hard, and Arkansas is in its direct path. Say a prayer for us if you think about it. I do not enjoy shelter-taking, especially at 2am with four kids and a mattress in a half-bath the size of a jail cell. Which, coincidentally, is EXACTLY what it feels like.

On Sunday, we came home from church and my six-year-old said this: “We gave an offering today at church, and I gave all my money.” Twenty-two dollars, everything she had left from her birthday. And my first inclination was to scold her, to point out all the things she wouldn’t be able to buy now because her money was gone, but I stopped myself.

Because…that would’ve been wrong. She was happy. She was giddy. She was smiling from ear to ear because she had just given all her money to God and she wanted Him to have it. And though I realize that—as her parent—this might require a little lesson on money management, for now, maybe I need to learn to shut up. After all, it won’t be long until she’ll be a grown-up like me, struggling to hand over a measly ten-percent every other Sunday, and not always with a great attitude.

It was good, this little lesson I learned from my youngest.

PS. By now everyone has seen the devastation in Oklahoma. It’s awful, heartbreaking, and not all that far from where I live. So please say some extra prayers today for everyone involved. And consider doing something to help the area recover–no matter how small.

The Whys Have It chapter 1