You know.
I hate it when people steal my ideas.

For example, I’ve written a few books. I’ve backed each one up on multiple flash drives and obsessively emailed them to myself over and over until I’m sick of seeing my own messages. Just to make sure someone else can’t claim to have written them (not that anyone would want to). Just so I can’t lose them. **on a side note: mid-way through writing my very first book, my computer crashed while I was typing a sentence. I lost five chapters. Now depending on the size, five chapters takes me, oh, about a month to write. When that happened to me on that sunny April afternoon, I took to my bed and didn’t climb out until June.**

Anyway, I want my ideas to be my ideas. So it was with a devastated heart that I turned on my television Tuesday night to see this staring back at me: 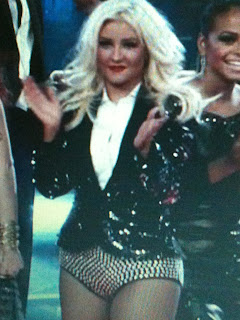 “My baby and I have matching onesies. But only one of us is wearing a diaper.”

I mean, I had JUST come out of my bedroom where I had laid out this EXACT same outfit for school the next day. Except I was adding a cool pearl brooch at the collar and a banana clip to wear in my hair. And I was going to teach second grade, and I thought the kids would think the whole get-up would be totally awesome. Especially because, at age eight, most of those kids would remember wearing this same outfit themselves. Minus the sequins and leather. I assume.

But no. For the second time this season, someone on The Voice stole my outfit. Remember what’s-her-name in the angel wings? 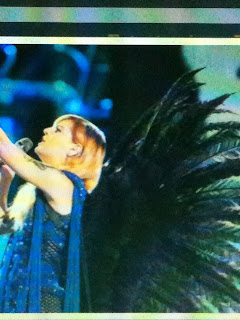 A total rip-off of something I bought at Wal-Mart the day before. Whatever, ladies. Whatever.

So let’s talk about The Voice.

First of all, I thought the right person won. Jermaine Paul has a mega-powerful voice. And to top it off, he ended the night by saying, “It’s all about Jesus, Man.” And who doesn’t love that? Even though in the end, I had developed a major crush on appreciation for Chris Mann, a.k.a. the opera singer. This guy could sing. Like, belt the pants off of everyone around him. (Case in point: Christina). But then I also liked angel-wing girl. With her raspy voice and rocker image, she was sorta a combination of Melissa Etheridge/Joan Jett/ladies from Hart. Not to mention she looked identical to a grown-up Cindy Brady. And I love all these women, so I was definitely a fan a hers (Google the Cindy thing. The resemblance is ca-razy). But then I also liked Tony. In fact, I liked him more and more with each time Christina criticized him. Seriously, what was up with that? As far as she was concerned, the guy couldn’t do anything right this whole season.

I have a theory on this. See, years ago they were both in the Mickey Mouse Club together. And I think she must have liked him back then and maybe he didn’t like her. Like, maybe he was all, “I think you’re cute and stuff, but I think we should just be friends. Besides, see that girl Brittany (Spears) over there? I think she’s hot. Will you ask her if she’ll be my girlfriend?”

And what girl wouldn’t hold a grudge over this? I know I would. I mean, if a guy I liked in Jr. High auditioned for my TV talent show, I would never turn my chair around for him. Especially if the guy trying out was the one in eighth grade who tried to kiss me when I was in the middle of talking to my cousin on the bus after a basketball game. Seriously, one minute I’m telling her about my cool new orange Keds, and the next…WHAM!! Right there, slobbering all over my cheek like…yuck! I turned my head away as fast as I could. And I was so embarrassed. And I didn’t know what to say. And I didn’t know what to do.

But I know what I’d do now. I’d say, get your butt off my stage, that’s what. Because I’m Christina Aguilera…er, Amy Matayo. And pass me a wet wipe to use on my slobbery face on your way out. Gross.

Anyway. What were we talking about?

Oh yeah. The Voice. And auditions. And onesies.
And the fact that I’m now stuck digging through the trash can for receipts. Sigh. I guess it’s not a total loss. Maybe I’ll exchange the outfit for a pair of 5-inch heels. And fishnets.

‘Cause next week, I’m going to Kindergarten.

The week’s almost over. Woo!

Just Say No and stuff…

When Life Gives You Lemons…Eat Some Pie