I could’ve died this weekend.

But I’m not sure anyone has ever croaked because of looking in a mirror. I totally think it’s possible, though. And let me tell you why.

So I think I mentioned this a few days ago, but I’ve had, like, eighteen hours of sleep in the past six days. Combined. Literally-ish. And I don’t know what the problem is, but the second I lay down in bed my eyes fly open. And I spend the next couple of hours alternating between mentally finishing the end of my current book, planning out my outfit for work the next day (which is stupid considering I’ve been running around a gym most of the time. So…Yoga pants. Black. Do other colors exist?), and psyching myself up for my X Factor auditions. Which I’m totally gonna do, because I sound just as awesome as anyone else on that show. As long as they let me use Brittany Spears’ autotune voice machine thingy…and audition in my shower.

Where the acoustics make me sound exactly like Adele. It’s uncanny.

And just in case that sounds weird, of course I’d be wearing a swimsuit. Hey—it worked for that chick on American Idol.

Which leads me to the reason I wanted so badly to smother myself this weekend.

On Saturday, I decided that it was a good time to go swimsuit shopping. Because clearly my sleep deprived mind has made me half-crazy. And because Spring Break is next week and we’re heading to the beach. And because I can’t bring myself to put on my current swimsuit one more time. Haven’t been able to locate the expiration date on that thing, but I’m pretty sure it spoiled sometime two seasons ago and needs to be stuffed down a drain.

**Let me pause this story a moment to issue a statement: Just so you know, if we get hit with a freak snowstorm that ruins my sandy dreams at the end of this non-snowing winter, I’m gonna be sooo ticked. So mad that you’ll hear me yelling from the gulf. Because even though I wrote a Grammy-worthy snow song and practiced a theoretical snow dance during the only full moon in February, that whole thing is null and void now. Caput. Because I am officially pulling the plug on any calls for future flakes. The window is closed. The time is up. Snow gods of 2012—I’m so disappointed in you. But don’t even think about showing up now if you know what’s good for you.**

Okay, back to my story.

Anyway, swimsuit shopping on a few puny hours of sleep was the worst idea ever. And goodness knows I’ve had plenty of those to know (I could show you a picture of myself circa 1996 to prove it…but, nah). But even worse than my idea was this nightmare that some designer on crack came up with to humiliate women everywhere: 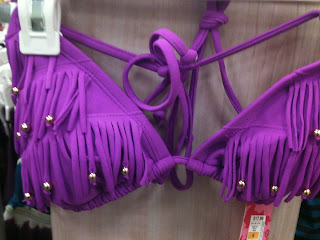 For the lady who likes Christmas ornaments with her fringe. Spurs optional.

And the there was this one: 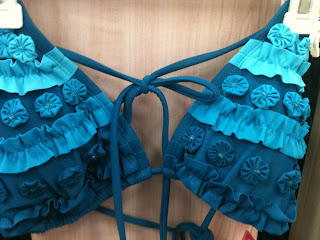 Because flowers make teeny and stringy look so much better.

From store to store I went, but it all slid downhill from there. There were suits with cherries on them. More suits with fringe. Long fringe. Short fringe. One combined with ruffles, for the woman who just can’t decide “Am I a cowgirl or southern belle?” Even one swimsuit with bells on the bottoms. Ew. And by the end of my shopping trip I was so frustrated, all I wanted to do was this: 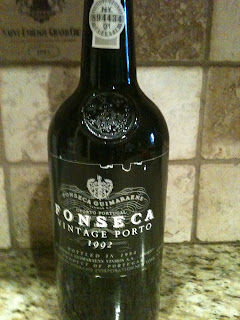 “Drown your sorrows in me,” it seemed to say. “I would if I liked you,” I answered back. “But I think you taste icky.”

Which is such a shame. Because I’ll bet if I downed that bottle of yuck, I’d sleep for quite awhile.

Either that, or be sick for days.

Then again, after that nightmarish trip that almost caused my untimely death…I kinda already feel that way.